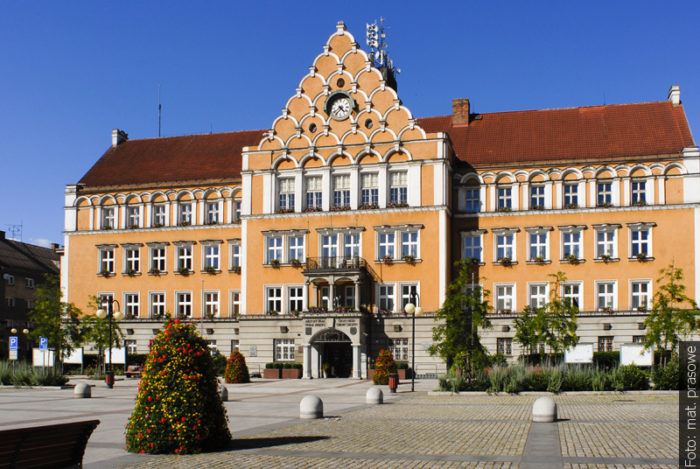 Czech cieszyn … City from across the olza river
According to an old legend, Cieszyn was founded at the beginning of the 9th century by three brothers – Bolko, Leszko and Cieszko. The Well of Three Brothers commemorates that very rendezvous (the symbolic spring where the brothers met) now located on the Polish side of Cieszyn, not far from the main square.

The turbulent history of this region led to the division of the Duchy of Cieszyn between Poland and Czechoslovakia in 1920 and the establishment of a new border along Olza River. This unfortunate decision divided the city into two halves. A former district of Cieszyn, the “Saska Kępa”, became a separate city which came to be called Czech Cieszyn. Saska Kępa used to be an industrial district, therefore after the division of Cieszyn, no valuable monuments, offices or educational institutions were located on the Czech side any longer. For this reason, in the 1920s, the construction of a new city centre began. As a result, present-day Czech Cieszyn is a separate town with its own town hall and market square

The best attractions of czech cieszyn
Although most of the monuments of Old Cieszyn are located on the Polish side, Czech Cieszyn and the surrounding areas have a lot in store for tourists.
The Church of the Sacred Heart of Jesus Christ in Czech Cieszyn was built in neo-Gothic style and consecrated in June 1892.
The archaeological park of Kocobędz (http://www.archeopark-chotebuz.cz/) is located near Cieszyn. The park is a copy of a Slavic fortified settlement dating back to the turn of the 8th century, while the beginnings of the settlement date back to the Bronze Age and the period of the Hashtal culture.
In the village of Cierlicko (Těrlicko) a dam was erected on the Stonávka River between 1955 and 1964, which measures 25 metres in height and more than 600 metres in length. Today it is a well-known and popular place for summer holidays. The lake features a swimming area and a water sports equipment rental.
Karviná (Karvina) is a city located several kilometres from Cieszyn in the region of Cieszyn Silesia. Its principal monument is the Frysztat Castle / the Palace in Frysztat. Also noteworthy is Masaryk Square (Masarykovo náměstí), which is the main cultural and social centre of the town. The town hall is located in the central point of the square and features a Renaissance tower, while the square itself is surrounded by interesting townhouses. A visit to Karviná is also an opportunity to cross the Olza river over the Arc Bridge that dates from 1925. The district of Darkov, on the other hand, is a spa with a very long history, as it was established in 1867. The waters the place is famous for are extracted from deep underground and are rich in iodine, which has help cure neurological diseases, circulatory system problems and skin diseases.

Czech cuisine – tradition and flavour!
Czech cuisine is terrific, unfortunately it is also high in calories and rather heavy for the stomach. It is difficult, however, to deny oneself the pleasure of trying out its rich flavours and experiencing its traditional character thanks to its cenuries’ old recipies.

The czechs are true soup lovers! There is no shortage of soups at any czech dinner. Their most famous one is garlic soup with cheese (česnečka se sýrem). If you are looking for a culinary experience, you should try another czech speciality, namely beer soup (staročeská pivní polévka), which includes beer, milk, flour and cinnamon. This is certainly not a proposal for everyone, but it is nevertheless very original.

In the general sense, czech cuisine does not exist without dumplings – a must have classic. The dumplings can be made from potatoes (bramborove knedlíky) or bread rolls (houskový knedlíky). They taste best with roast pork and red cabbage salads – this is the czech equivalent of the polish schabowy dish.
Dumplings are also found in a sweet, fruity version which is sold as a dessert. Dumplings with strawberries, plums, blueberries or apricots are the most popular. Served with butter, powdered sugar, as well as cottage cheese, whipped cream or chocolate with cinnamon – they are a great feast for the palate. Other famous desserts include the czech national cake – jablkový štrůdl (apple strudel) and český kolač (bread rolls with jam). Forget about the calories and indulge yourself in a wonderful world of taste heaven.
Czechs are also cheese lovers, one of the most popular snacks is fried yellow cheese (smažený sýr) most often served with fries (hranolky) and tartar sauce (tatarskou omáčkou). Apparently, it tastes best with czech beer!
Czech cieszyn has its own iconic dish, which is loved by tourists all over and is a culinary symbol of the town – cieszyn sandwiches with herring! They are said to be one-of-a-kind, and their recipe conceals a secret, thanks to which they taste so good only in czech cieszyn.

So much has already been written about czech beer that it needs no sales pitch, but it is worth exploring the popular czech non-alcoholic beverages as well. These are kofola and malinovka. Kofola is a carbonated non-alcoholic beverage, which in the past was czechoslovakia’s response to the capitalist coca-cola. It was created in 1960 and it is not difficult to guess that it has gained a huge group of admirers. It temporarily lost its popularity as a result of changes in the 90s, but no sooner than at the beginning of the noughies it triumphantly returned to grace and is now a serious competitor of coca-cola and pepsi. Kofola is available in various flavours: citrus – lemon, skořicová – cinnamon, cherry, extra bylinkova – peppermint and vanilla.

The czechs love old flavours and this is why malinovka, a fizzy lemonade, is so popular. As the name suggests, it is always red, with a raspberry flavour and is usually produced from high quality mineral waters. The beverage offers a trip back in time to when orangeade enjoyed its peak of popularity. The czech republic is a land with a richness of flavors. It remains very faithful to tradition, which is an unquestionable advantage from the point of view of every tourist.